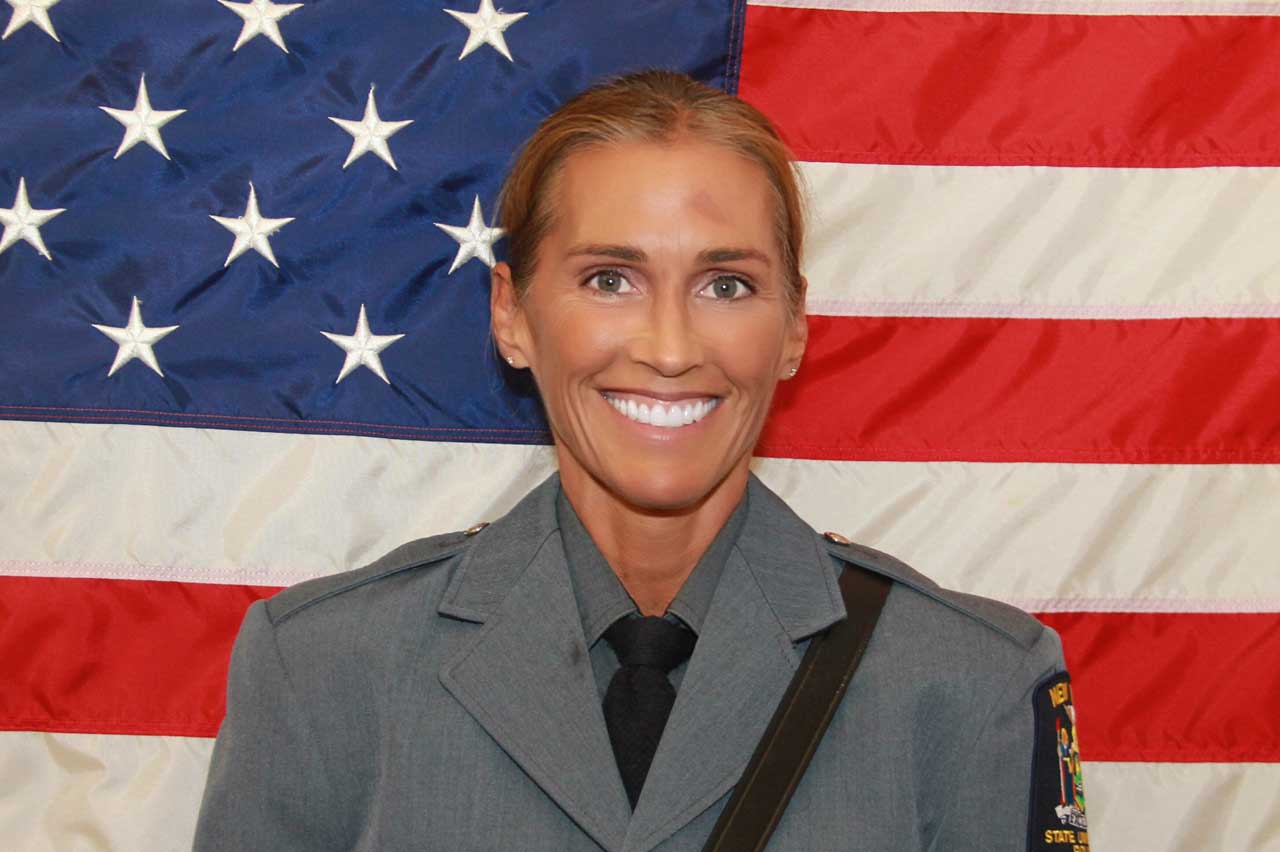 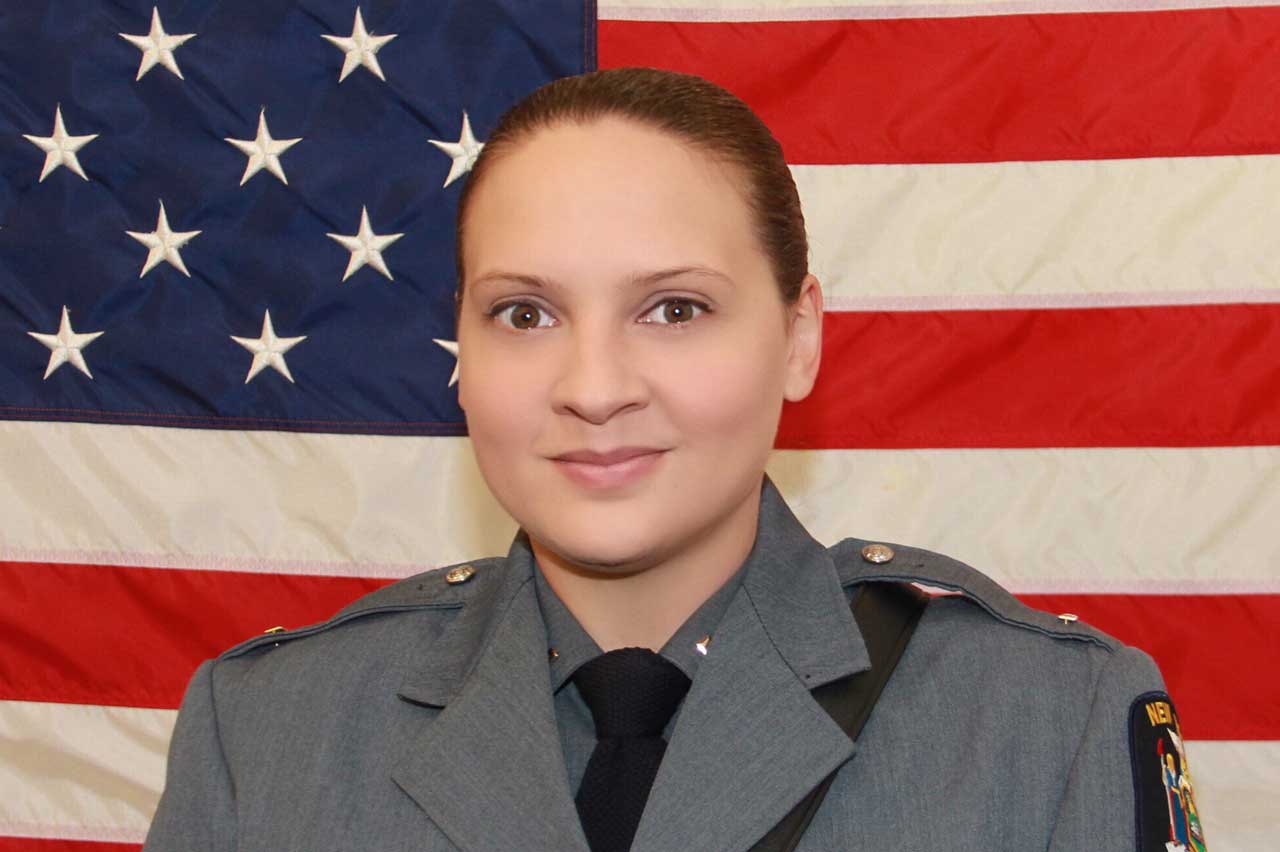 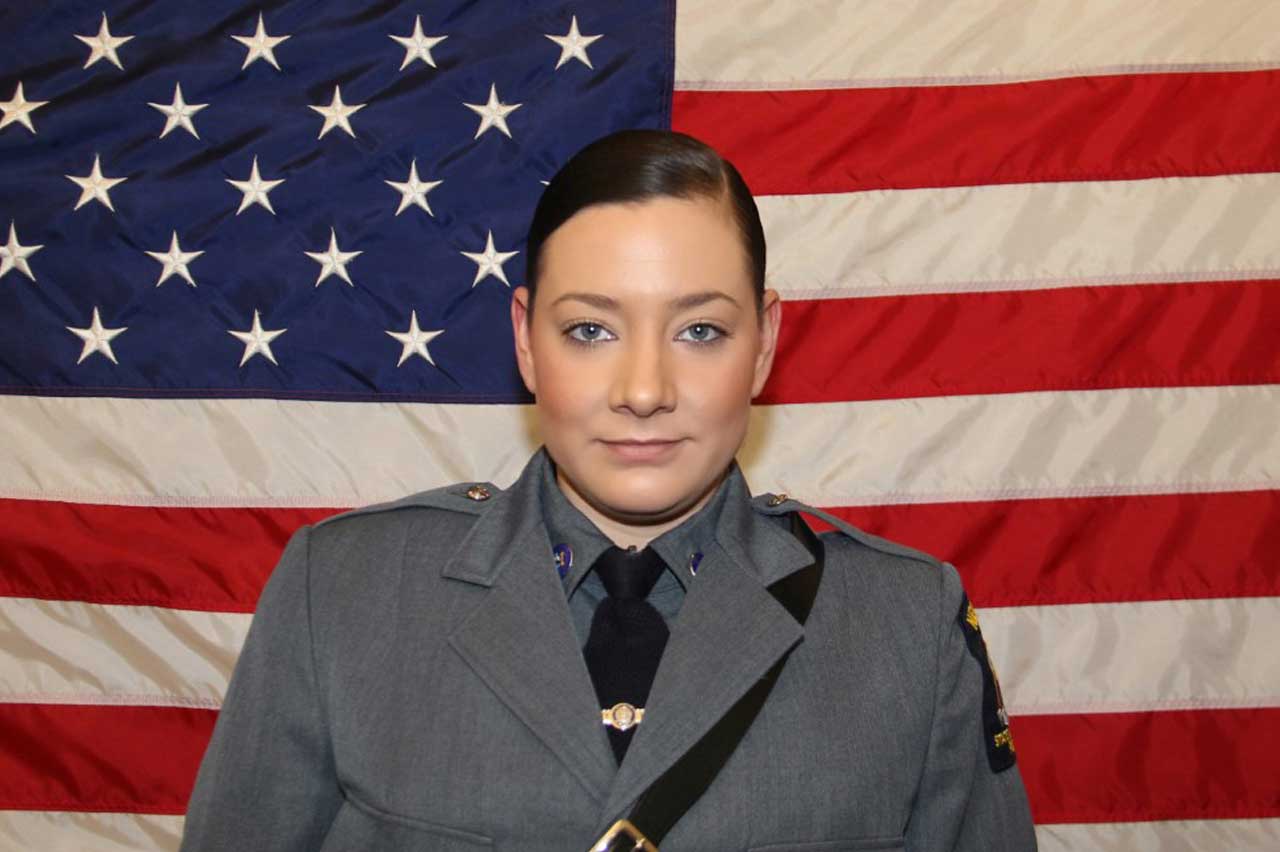 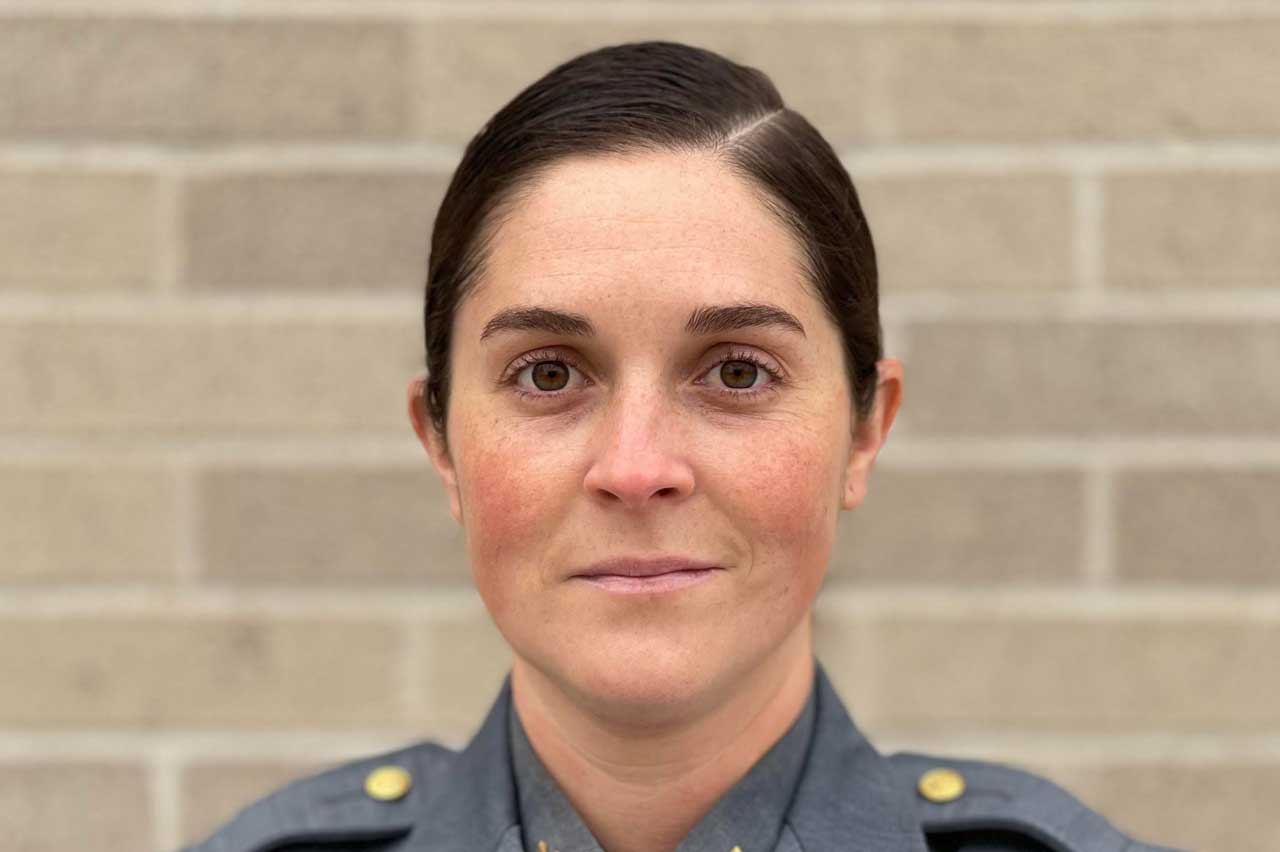 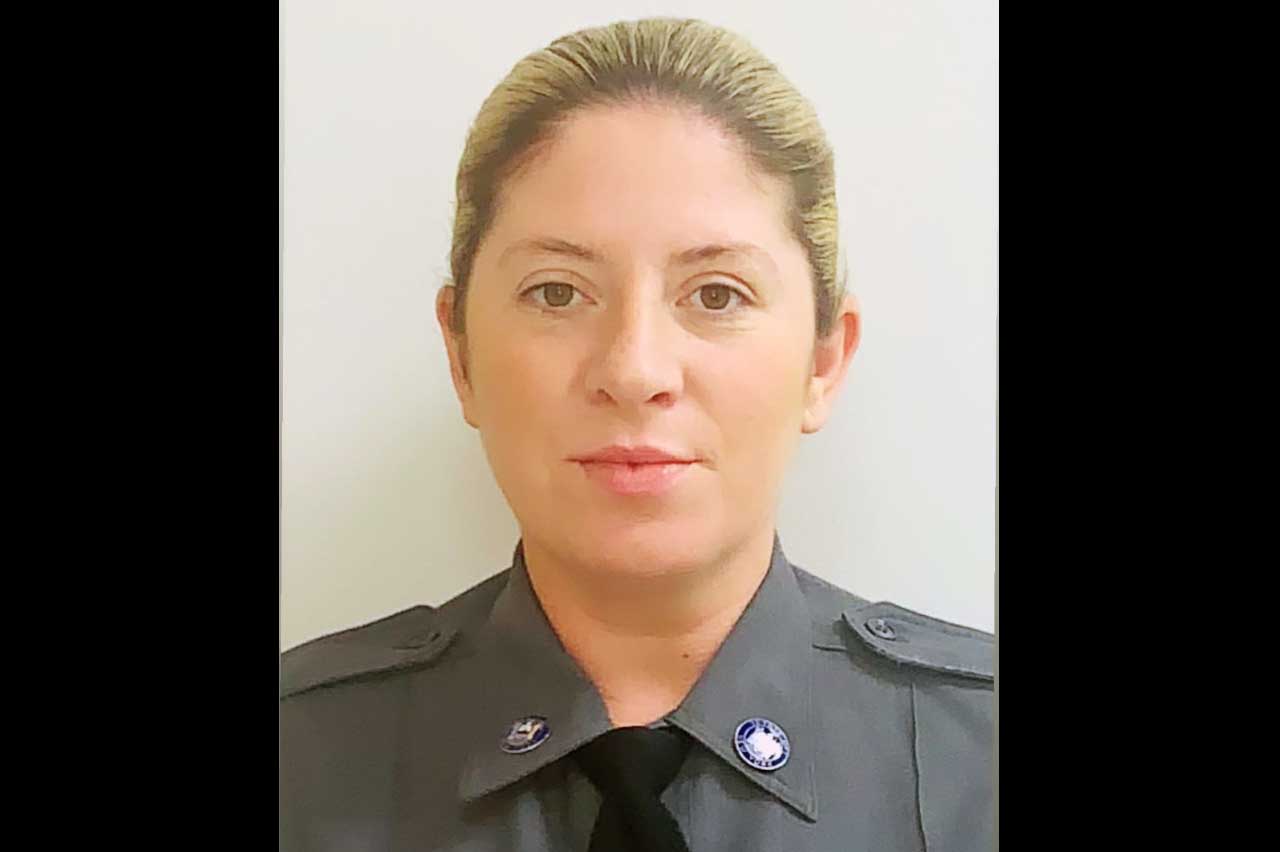 On January 24, 2020 at about 10:00PM, Lieutenant William Shaw was working the night shift as a Field Training Officer with new officer, Mallory Nelson who had just graduated the police academy the previous month.  Officers responded to the Village of New Paltz under mutual aid to a fight in progress at P&G’s bar, with a possible stabbing victim.  Officers arrived on scene and observed several other police units parked in front of the establishment.  Because of Shaw and Nelson’s diligence, they observed that the suspect was actually around the side of the building being held by civilians.  The officers exited their patrol vehicle and quickly gained control of the suspect, getting him into custody before anyone else was injured, without regard for their personal safety.  It was confirmed moments before that the suspect had stabbed another person.  Lt. Shaw was Officer Nelson’s field training officer at the time and displayed great leadership and proper tactics to the new officer.  Officer Nelson acted without hesitation to effectively secure the suspect’s legs and helped her partner effect the arrest.  The officers displayed a great team effort during this incident that highlighted the qualities necessary in order to have a positive outcome during a serious incident. The officers helped quell a very dangerous situation, not only to the stabbing victim and other bystanders, but also to other officers responding to the scene.

Lieutenant William Shaw and Officer Mallory Nelson conducted themselves with the highest degree of professionalism and their actions are representative of the professionalism of the New York State University Police and worthy of the SUNY Police Chiefs Association Professional Service Award.

On Wednesday, March 18, 2020 at approximately 6:14PM, a non-affiliate telephoned NYS University Police at Old Westbury stating she received two disturbing snapchat photographs from a friend, who is a SUNY Old Westbury resident student. One photo showed her friends’ wrists bloodied with cuts, another showed a pill bottle in the background. The caption on the photograph read “so much for healing, it’s a myth…I’m scared but I’m even more scared to keep living. I’m so sorry to those who have loved me_ unconditionally”.

Members on duty recognized the students’ name and immediately initiated a missing persons investigation. Over the past five months the student had multiple welfare checks conducted including an incident in which the student was transported to the hospital to receive necessary mental health services. Officer Amanda Rothenbucher and Technical Sergeant Brett Cruickshank organized a search of the campus, including the assistance of residential life staff, canvasing locations the student was known to frequent. While the searches were being conducted, phone calls were made to her associates and an exigent request was made to her cellphone provider to locate her phone. The phone “pinged” in Freeport, New York and a request was made to the Freeport Police Department to assist in the search, which met with negative results. Notifications were also made to the Metropolitan Transportation Authority Police Department after it was revealed that the student finds comfort in riding the trains when in a depressive state. A notification was made to the New York State Missing Persons Clearinghouse, which resulted in a tremendous amount of local and social media broadcasts to alert the public. The students’ phone was programmed to alert an acquaintance of hers, with a GPS location if 911 was called. At 11:17PM, a 911 call was made from the students’ phone at the Long Island Rail Road Jamaica train station. Notifications were made to the local New York City Police Department Precinct, Transit District, and the Metropolitan Transportation Authority Police Department was updated, again with negative results.

Investigation continued into the following day on Thursday, March 19 under the supervision of Lieutenant Renee Znack. Officer Rothenbucher and Lieutenant Znack were advised that the student had a conversation with the college counseling center via telephone. Officers met with counseling staff to confirm students’ status and to encourage them to have the student contact University Police. During the same time frame the tracking of the phone became active, indicating a location in Queens, New York. Investigator Ryon Burnett and Investigator Julie Donley immediately responded to the area, approximately 45 minutes away. The student then contacted Communications & Security Specialist Leonard Baker at University Police dispatch but was apprehensive about giving her location. Officer Rothenbucher engaged in conversation with the student, explaining that her safety was a priority, and we would be able provide her with help if she met with the investigators. The student agreed to provide the address at which she was located. The information was transmitted to the investigators and they met with the student. The New York City Fire Department Bureau of Emergency Medical Services responded to the location and transported the student to a local hospital for treatment.

On Monday, December 2, 2019 at approximately 1:45PM, the SUNY Old Westbury Office of Public & Media Relations discovered on the college’s social media monitoring service account, HootSuite, that Twitter user LarryBands tweeted “At This Point I’m Boutta Stand In The Middle Of SUNY Old Westbury & Let The Bullets Do What They Gotta Do. F*cking Tired of Life”. That office immediately notified the Chief of University Police Steven Siena. Chief Siena ordered an immediate investigation and recall of off-duty members of the Department for deployment. Investigator Ryon Burnett recognized the twitter name and associated profile picture as belonging to a SUNY Old Westbury resident student, who was known from prior interactions. While Investigator Burnett initiated his investigation, other members conducted a search of campus to locate the student.

At approximately 3:12PM, Investigator Burnett located the student in campus center and approached him to discuss the tweet and his emotional state. The student stated that he experienced “suicidal thoughts lately” and that he “thought he deleted the tweet”. The student stated that his mention of “bullets” was in reference to suicidal thoughts he recently experienced, but that he did not plan to target anyone at SUNY Old Westbury or the institution itself. The student voluntarily walked with Investigator Burnett to University Police Headquarters to discuss the matter further. Investigator Burnett was assisted by Investigator Donley who was re called due to the incident. The student voluntarily provided a sworn admission that he posted that message on his Twitter account. Upon presenting the case to the Nassau County District Attorney’s Office the defendant was charged with “Making a Terroristic Threat”. The defendant was arraigned in Nassau County’s First District Court on December 3, 2019 and remanded, with bail set at $100,000. Prior to booking the student was removed to Nassau University Medical Center for psychological evaluation.

On January 22, 2020 the College Conduct Board found the student responsible for Failure to Abide by Federal, State, and /or Local Laws & Threatening or Abusive Behavior and as a result of that decision was expelled.

Investigator Ryon Burnett and Investigator Julie Donley conducted themselves with the highest degree of professionalism and their actions are representative of the professionalism of the New York State University Police and worthy of the SUNY Police Chiefs Association Professional Service Award.

Investigator Jessica Facteau has proven herself as a valuable asset to the SUNY Plattsburgh University Police, first as an officer and then Lieutenant and continuing now as an Investigator. Although her contributions for the betterment of the department span several years, there are a few contributions she has made that have greatly enhanced the operation of the department this past academic year.

Investigator Facteau is one of those tenacious officers who is involved in everything.  She is the first to volunteer for assignments, first for connecting with the campus community and first to seek out opportunities to increase her knowledge and promote both the department as well as the members in it.

She is involved in several campus committees, many of which she was appointed by the campus president.  She provides education to incoming freshman, campus employees and the department in topics such as active shooter, Fair and Impartial Policing, and Hate Crimes.

She co-created the department’s Student Safety Ambassador Program, which enlists students representing a cross section of our campus community, who work with University Police Officers to patrol, to implement safety programs, and to provide opportunities for campus connections.  Some of these ambassadors have completed the program as interns, which Investigator Facteau also manages.

Additionally, she has conducted several criminal investigations including multi-agency drug investigations for which she obtained and executed search warrants, provided grand jury testimony and service of indictments.  She shut down a fraternity conducting prohibited hazing and infiltrated a campus drug ring seizing $15,000, psychedelic mushrooms and cannabis.

Investigator Jessica Facteau has conducted herself with the highest degree of professionalism and her actions are representative of the professionalism of the New York State University Police and worthy of the SUNY Police Chiefs Association Professional Service Award.

Other posts that you should not miss. 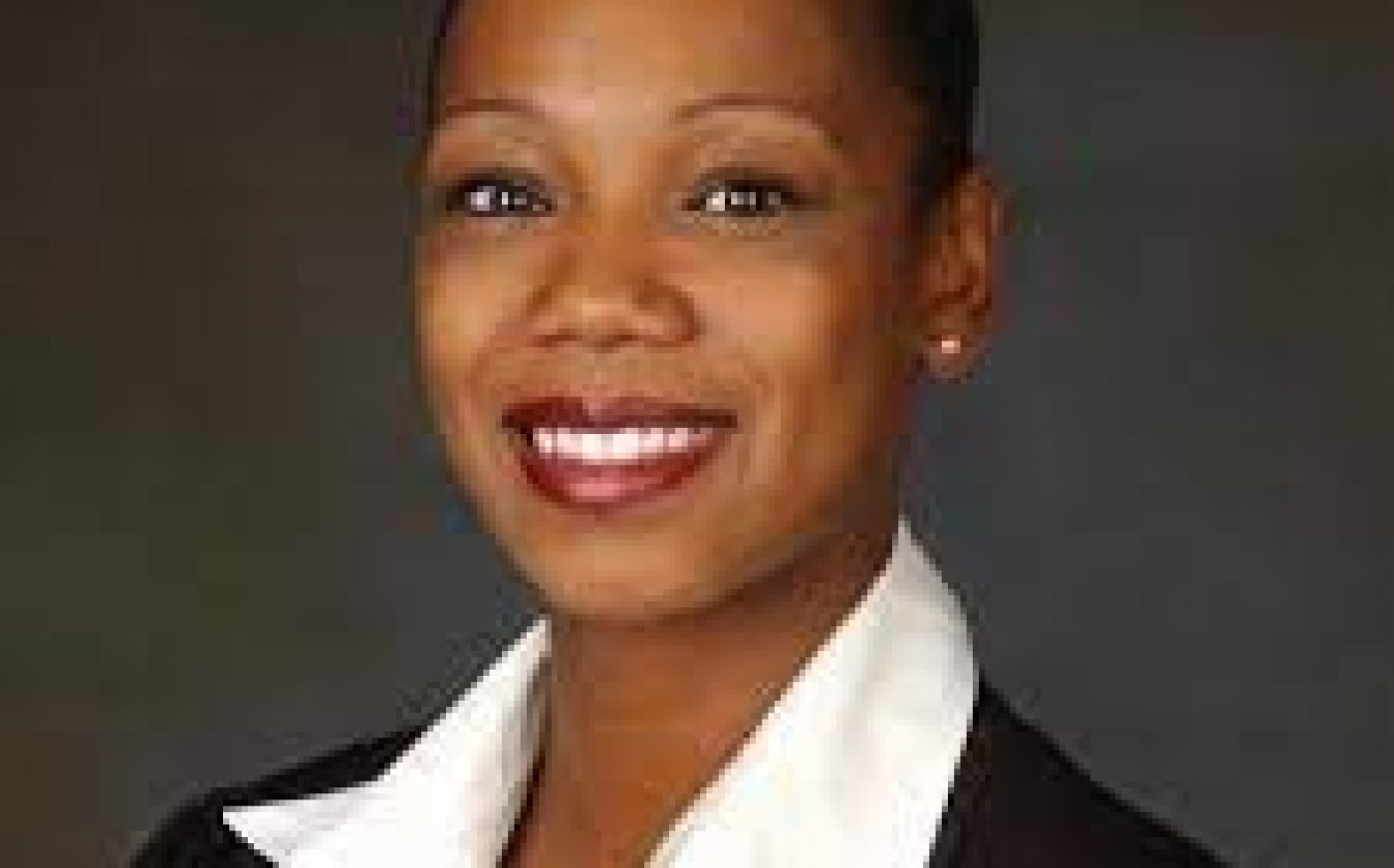 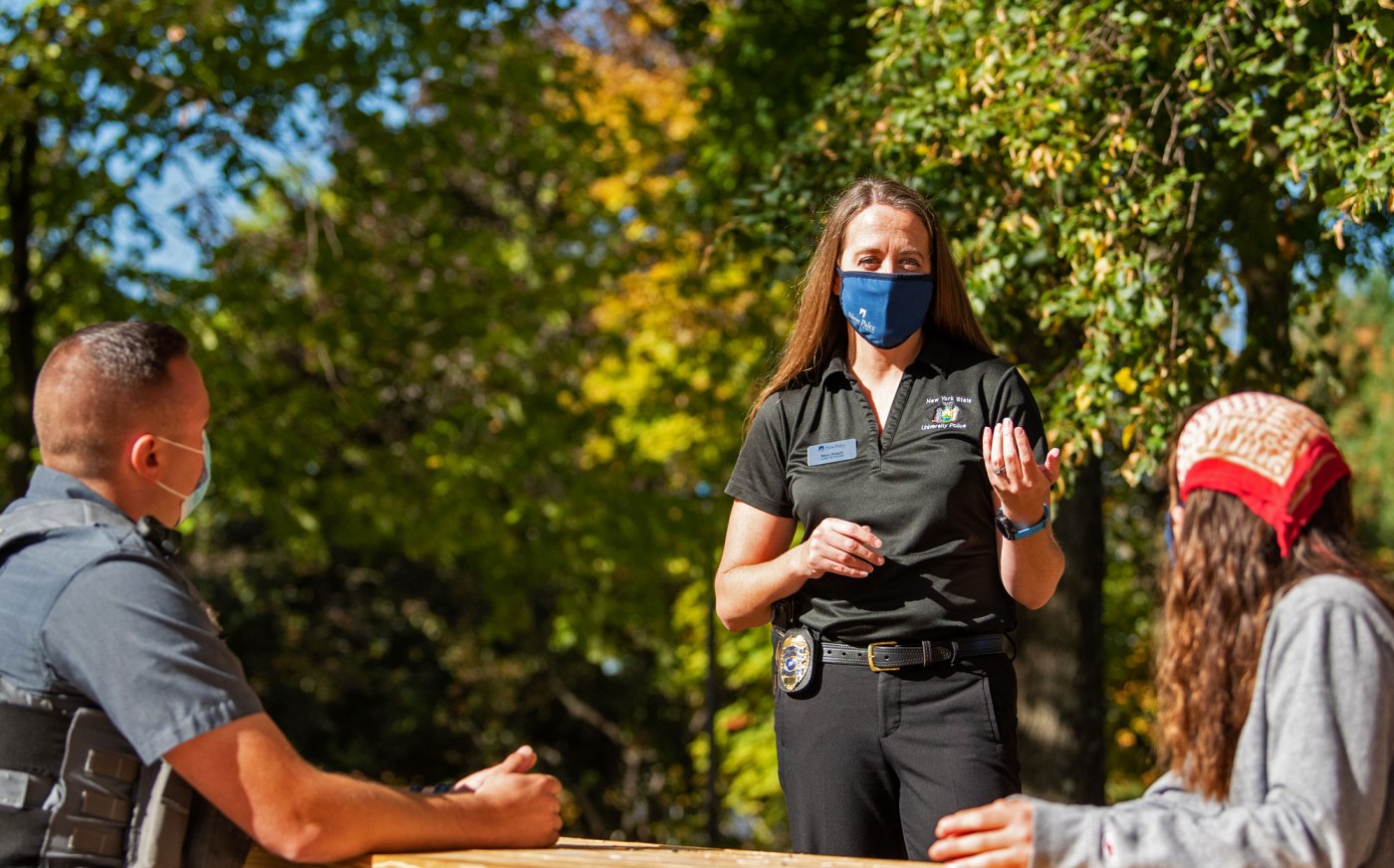 Chief Ritayik is the First Female Police Commissioner in SUNY History, and the First to Rise in the Ranks from Campus …

READY TO TAKE THE FIRST STEP?